In general, numbers on the form $$ z=a+bi $$ Are called complex numbers, the a is called real part of b and b is the imaginary part of z. They are denoted respectively for \( Re z=a, Im z=b \).

The complex plane consists of all complex numbers, that is, pairs of real numbers (a, b), formally $$ \mathbb{C} = \{ z = a+bi : a, b \in \mathbb{R} \}$$ This notation, used for the first time by Euler in 1773, gives way to a precious and prosperous branch of analysis called Complex Variable analysis.

Every complex number can be written in the polar form , so

by polar form of a complex number we have 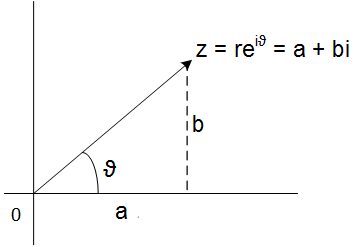 being r modulus of z. It is calculated as

Lets use this link to see how to calculate power of complex numbers.