Are numerical methods whose to forward a step, only the previous step information is needed, ie step n+1 only depends on the step n. Or with more precision, are methods of the form

Note that this problem, is really an equations system.

There are other methods called multi-step, which for to forward a step is required two or more previous steps and there are not linear methods, we will not discuss both kinds of methods here.

Where C is a positive real constant, the number k is called the order of the method

Note: The function is one-tme evaluation at each step, so the number of stages is 1.

Note: function are evaluated two times at each step, so stage-number is 2.


We adopt the following definition as Runge-Kutta Methods:

and the error holds the condition


So, to give a Runge-Kutta Method is necessarily give the s2 + 2s numbers

An interesting feature of the Runge-Kutta methods is that it is not needed to calculate derivatives of f to forward. The price to pay for it is to evaluate more times the function f with the consequent operational cost.


One method is more efficient if has a reduced number of stages, maintaining order, for example between a 3-stage method with order 3 and one 4-stages of order 3, is much more interesting first one because if we take a step h, the number of calculations to be done will be lower for it.
Butcher Boards
Given a Runge-Kutta, we construct a board as

Also it is possible to write as board Butcher

For example, the board Butcher for the Euler method is

For the midpoint rule of order 2

And for the standard Runge-Kutta of order 4 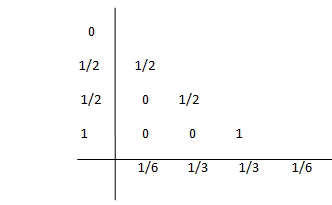 A Runge-Kutta method is said to be consistent if the truncation error tends to zero when Gloval the step size tends to zero.
It can be shown that a necessary and sufficient condition for the consistency of a Runge-Kutta is the sum of bi's equal to 1, ie if it satisfies

Similar conditions can be given for methods with orderers 3, 4, ...
Explicit Runge-KuttaMethods
In a Runge-Kutta explicit, given in the ki the definition does not appear as a function of them themselves are clear The matrix a in the Butcher board is "almost inferior triangular" because it is inferior triangular and the diagonal elements are zero too. 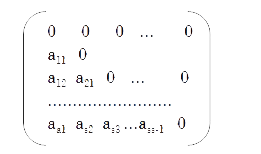 Theorem
A Runge-Kutta explicit method with s-stages may nor have order higher than s.

More generally we have the following table

That step size is necessary? The answer to this question is that depends on the specific problem and the desired degree of accuracy.

One thing to consider is that Runge-Kutta methods lose some precision when the derivative of the function analysis is very large or frequently changing sign, such cases requires a very small step size to obtain an acceptable degree of accuracy

At next section we will see the Fehlberg Pairs embebbed , are methods in which the step size will vary automatically depending on (among other things) of changes in the derivative of the function

If you want to see now an example of how these methods works, access to RungeKutta Calculator where you will see the default problem