Most of the complex variable functions are extensions of the real variable functions. For example the complex logarithm, wich calculation is realized in the following way $$log z = log|z| + i Arg\,(z), \, Arg\,(z) = arg(z) + 2k\pi i$$ It is an extension of its homologous logarithm from the real variable. Now we can calculate logarithms of negative numbers and other complex numbers in general.

Therefore, it is easy to see now that any circumference of radius r is transformed into a segment \(log(r)\,x \,[0,2\pi]\).
And from this we deduce that the whole complex plane becomes the band given by the whole set
$${z\in \mathbb{C} : Im(z) \in [0, 2\pi]}$$
Observe that the negative part of the band is the image of the interior of the circumference of radius one and the positive part is the image of the exterior, let see the following figure:


Easy. Do not? This is the idea: we can not represent complex variable function graphs but what we can do is see the geometry of its transformation through some pre-known sets.


Note that in order for the above definition to be fulfilled, it must be fulfilled in particular that \(f'(z) \neq 0 \).

If function is holomorphic (ie, it has complex derivate), then there is an interesting theorem called

The following theorem guarantees that given an open and simply connected region can be transformed, through an holomorphic function into the unit disk.


In particular, any region with "worthy" properties, that is, simply connected and limited by a closed and simple curve, (therefore bounded) can be applied into unit disk through any holomorphic function.

It is not so easy to see that in fact, f is not an inversion, ie, each point z of the interior of the disk does not assign an exterior w such that argument of w = argument of z and radius of w = inverse of the radius of z . That is, it is not true that 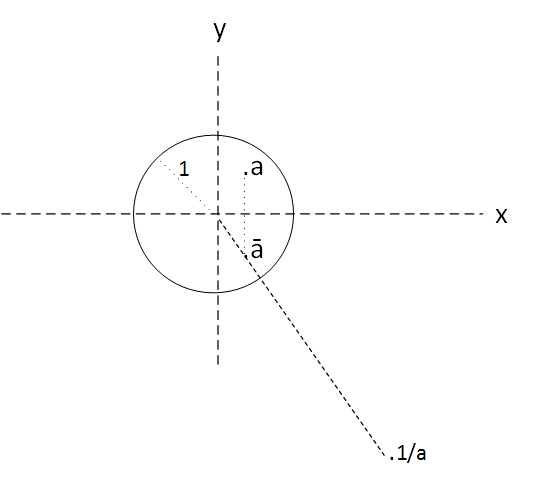 
In this case the function f, transforms a sector of the plane with angle \( \frac{\theta}{m} \) into the superior semiplane. This is because power complex transformation, whose expression es
$$z^{m} = |z|^{m} e^{(mi\theta +2mk\pi i)} $$.
Note that to raise a complex number to a power m, the argument is multiplied by m (and the module is raised to the power m).